Since 2004 I've been guiding in the Arctic and Antarctica.

I love guiding polar expeditions. Any opportunity to introduce people to our wonderful polar environments is a privilege that I will forever appreciate.

After a career in Outdoor Education, culminating in five years as Director of Outdoor Education at Geelong Grammar School's Timbertop campus, I embarked on a career as a professional adventurer, skiing to both poles, across Greenland and the Patagonian Icecap before trying my hand at polar guiding. With my outdoor training it was a natural fit and I immediately fell in love with the blend of adventure, guiding and mentoring. 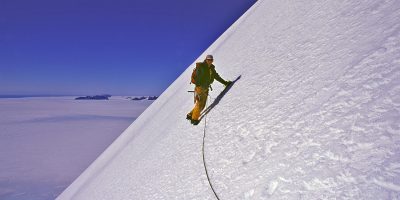 My first real guiding job was with the Australian Antarctic Division working as a Field Training Officer at Mawson Station. It was nothing short of awesome. Since I was a young boy I'd wanted to visit Antarctica and here I was, finally on the continent and doing what I loved, being adventurous and immersing novices in a polar environment. I trained staff in polar survival and safety, assisted scientists on field trips, learned about aircraft tasking and ground procedures, trained a search and rescue team for the winter and travelled across every type of ice terrain, visiting amazing places like Emperor penguin rookeries, glaciers, steep mountains and offshore islands. I returned from those 4.5 months in Antarctica with the intention of going further afield, skiing to the South Pole, which I did in 1998. 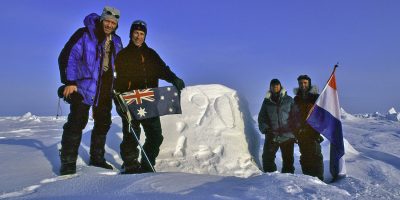 My first Arctic guiding job was a North Pole last degree ski expedition in 2004 with two Australian adventurers and my cousin from Holland. My thanks go out to team member Mark George who prompted me into this guiding job. Mark has since skied solo from Hercules Inlet to the South Pole and climbed Mt Everest. Since that trip I've guided a ski expedition every year on the Arctic Ocean, to or from the North Pole. The shortest was an 8-hour ski with a couple in the their late-70's, the longest an expedition from NP to Canada, 800km in 39 days. In 2016 I guided 14yo schoolgirl Jade Hameister and her dad Paul from 88.40N to the North Pole. All of these trips have been done through the town of Longyearbyen in Svalbard, using the dedicated services of Vicaar and Polar Expeditions, two Russian companies specialising in the difficult logistics of airborne North Pole travel. 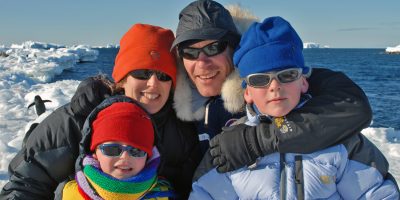 In 2006 I took my family to Antarctica from Hobart on board Sarsen, an Australian-owned ice-strengthened ship. I worked on board as a guide but the opportunity to take my family was one I couldn't pass up. We visited Macquarie Island and Mawson's Huts in Commonwealth Bay where my son had his 5th birthday. My first South Pole guiding expedition was a big one, skiing 900+km in 38 days from the Ronne Ice Shelf to the pole with Team CANDU, an anagram made up of the nationalities on the team, Canadian, Australian, Norwegian, Dutch and United States. Since then I've had the privilege of guiding Pat Farmer on the Antarctic leg (and Arctic leg) of his Pole to Pole Run, wounded soldiers on a two-degree ski expedition to SP along with Prince Harry and Chinese teams to visit the South Pole and Emperor penguins every year since 2010. 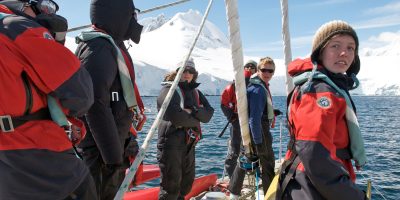 Another amazing Antarctic trip was with 13 students and two staff from Geelong Grammar School on board two professionally-crewed expedition yachts Spirit of Sydney and Podorange to the Antarctic Peninsula from Ushuaia, Argentina. While on the peninsula we did an overnight ski tour, sea kayaking, ice climbing and challenged the staff at Ukrainian station, Vernadsky, to a game of soccer. We were comprehensively thrashed!

Other interesting jobs include polar guide on board Greenpeace icebreaker Arctic Sunrise as we spent 3-months circumnavigating Greenland, Field Leader on an International Polar Year scientific project on Dome Argus in Antarctica and consultant to many private expeditions to both poles.

In 2011, together with an international team of guides, I launched the International Polar Guides Association, of which I am its President and a Master Polar Guide.