Since 1992 I've been exploring the Earth's polar regions. 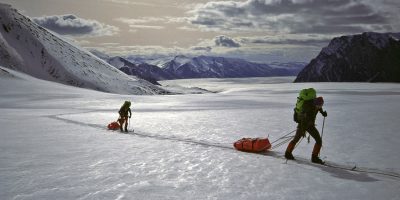 Exploration has always been at the core of my instinct. I felt it as a kid but my first real attempt to go polar was back in 1986 when, travelling around the world with my girlfriend, I felt a strong desire to visit Alaska. Although we only made it to the panhandle, not polar by a long stretch, I was hooked on travelling as far from the equator as possible.

It wasn't until 1992 that I made it across the Arctic Circle, a long way across, to the icy wilderness of Ellesmere Island in the Canadian High Arctic. This was my first expedition and it was back in the day when guided polar trips were non existent. I learned everything from scratch. Cross-country skiing and snow camping in Australia; a mountaineering course in New Zealand; wilderness savvy from a career in Outdoor Education; early dabbling in equipment design and modification. It all blended to make for a successful trip - a crossing of Ellesmere's largest icecap and an ascent from sea-level of it's highest mountain, Barbeau Peak. I was hooked. 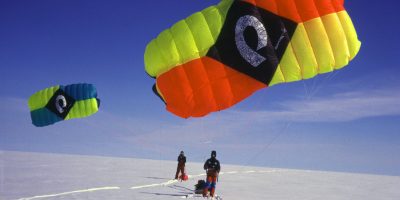 I dreamed of the North Pole solo but I was far from ready for such a mammoth challenge. I had nightmares about thin ice, polar bears, being stranded, and switched my thinking to Greenland. My intuition paid off and in mid-1995 I made a multi-disciplinary expedition across the icecap. My team paddled part way down the east coast in white-water kayaks, then used them as sleds to cross the icecap. But I had a secret weapon up my sleeve. At the time I lived in a Melbourne suburb that was close to the foreshore and almost daily I could look out of my lounge room window and see kites bobbing around in the sky. One day I introduced myself to the kite buggyers playing there and to cut a long story short, my team took a quiver of Quadrifoil traction kites to Greenland and we covered almost half the crossing using wind-power. It was the birth of traction kite travel in the polar regions. 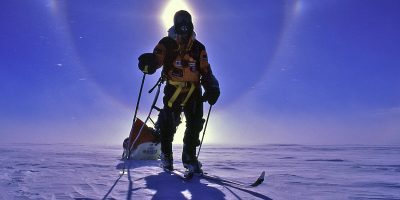 After a season working with the Australian Antarctic Division at Mawson Station (crossing the Antarctic Circle for the first time on board Australia's icebreaker Aurora Australis) I organised my first South Pole expedition. It would turn out to be quite a failure and a lesson in team dynamics. Our intention was to ski from the coast of Antarctica to the South Pole and reap the reward of kiting back to the coast again, without any resupplies or support. We would just rely on our own depots, placed strategically en route. But, plagued by conflicting agendas, our team only made it as far as the South Pole before being flown out and I believe we still hold the record as the slowest ever ski team to the South Pole - 1425km in 84 days! But, I'd reached the bottom the the world, we pioneered a new route up the colossal Shackleton Glacier, and I began a life-long friendship with an Aussie adventuring icon, Jon Muir. 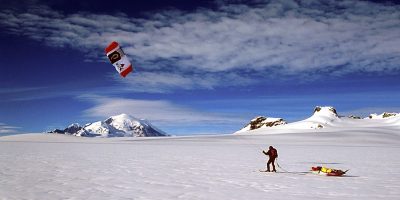 An exciting kite-ski crossing of the South Patagonian Icecap followed in 2000 before tackling the big one, the North Pole, with Jon in 2002. It was everything I imagined. Committing, remote, cold, icy, and exceedingly difficult. We had a polar bear encounter, immersions, frostbite, lost and broken equipment, and yet we endured it all - 900+km in 58 days - and found ourselves at the top of the earth's axis on April 30, my 40th birthday.

From 2004 guiding took over my life, a natural pairing of polar adventuring and outdoor education, and I loved every moment, every trip, every participant. I've since been to both Poles more than 20 times combined, and, as of July 2016, have many more to come. I still have my fixes of private trips though. In 2008 I crossed Svalbard from Ny Alesund to Longyearbyen and in 2015 completed a 2-week solo kite-ski expedition from ALCI Airbase to the iconic peak of Ulvetanna in Queen Maud Land, Antarctica. And In 2016 together with my daughter Mardi we skied for ten days across the amazing glaciers and icecaps of Spitsbergen. The future too is bright with adventure, with two new routes, both unsupported and unassisted to the South Pole within two years. I'll forever followed the urge to go where others haven't. To explore the path less travelled.

It's what drives me every day of my life.